Living With HIV Has Not Stopped Collins From Helping Others 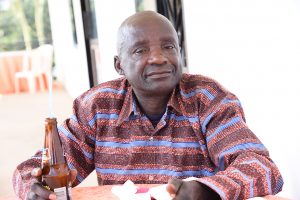 “On a morning in 2010, I collapsed and was taken to Arua Regional Referral hospital. I tested positive for HIV. I got to know my status 2 weeks after I had been admitted because I was unconscious for all this time” Collins, a 59-year-old resident of Zombo district narrates.

Collins Canudwoga is a resident of Zombo district and leader of the Zombo District People Living with HIV/AIDS Network Forum a community-based organization (CBO) that has set out to create awareness on HIV/AIDS and cooperate with people within the communities in the fight to end HIV/AIDS.

When Collins was discharged from the hospital, his relatives and friends claimed that he was bewitched. However, he had accepted his status and started his medication.

On 1st December 2010, Collins declared his HIV status publicly at the World AIDS Day event organized in Nyapea sub-county, Zombo District. He says many people were astonished by his courage and he has since been committed to creating HIV/AIDS awareness in his area.

“I had several colleagues that were HIV positive but living in hiding, with fear of stigma. When I came out on my status, they also joined me. Many of these people have been attending the World AIDS Day events at the district,” Collins said.

Collins was appointed as the Chairperson for People Living with HIV/AIDS (PLHIV) in Zombo District. He has since been proud to tell his story to the people in the communities and this has also helped him deal with stigma.

The forum cooperates with district leadership, police, and the office of the district health officer, and the community development office. PLHIV networks have also been formed in sub-counties and town councils to increase the scope of reach in the communities and ensure good coordination to the forum.

“We are grateful to IDI for the support they have offered. This support has enabled us to interact more with the community through client follow-ups, initiation of referrals between community and facility including ART initiation, psychosocial support among others

make a lot of changes; IDI presence is felt in the community. Through monthly meetings, client and community drug distribution points, there is improved retention because it is easier for people to receive their medication. We equally appreciate CDC for considering IDI to run this project in the West Nile region” Collins says.

The comprehensive HIV/AIDS services support within the West Nile region by IDI under the West Nile HIV/AIDS Project has been made possible with support from the Centers for Disease Control and Prevention (CDC)/PEPFAR.